Before liberating mine, I played around with if for one week, so that I can see the difference. It did not take long until the phone got on my nerves. There were applications eating up my battery, and I was not able to remove them, although I did not intend to use any of them. So I was already looking forward to Friday to get rid of these applications and to have more control over my mobile phone. 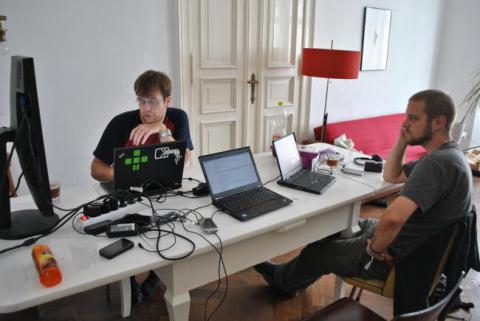 To free my phone I first had to unlock the bootloader. There is a description on Sony's website how to do that. You have to check a tick box on many things which are intentionallyconfusing, and frighten you with things like "you will lose your warranty", and they make it really hard to unlock your phone, e.g. entering codes like *#*#7378423#*#* or *#06#* to get an "IMEI number" to receive an unlock code. If their website would not have worked on that day, I would not have been able to install another operating system.

One new problem was, that I was initially unable to install fastboot onmy laptop (the error was "command or file not found"). Fastboot is autility that is used for installing the phone bootloader, which you usefrom a separate device. But after some time we found out that I had to install "ia32-libs", to get it running.

Before flashing CyanogenMod I had to think about which version I want to use. Although Torsten is missing some features from 7 I decided to go with version 9 and continued with the instructions in the wiki. After booting the CyanogenMod first time, there where some error messages so I tried it with flashing another kernel. So this was fixed, and I was pleased to see how smoothly the new operating system was running on my device.

So, I continued with exploring the applications. I was pleased, that my phone was not trashed anymore with applications I will never ever use. My next step was to explore the f-droid market, to install other Free Software. Unfortunately, the f-droid market is not installed by default in CyanogenMod, so I first had to manually install it from the f-droid website, after allowing third party software installation (in "system settings" / "security" / "unknown sources"). So here a list of applications I kept after testing a lot of them:

For XMPP I found no real good solution. On my N900 I am used to have XMPP nicely integrated in my contacts, see the status everywhere and get instant messages like text messages. For the moment I installed Yaxim as a workaround, which was the XMPP client which worked best for me (gwibberbot for example did not run, but I did not have time to investigate).

The second thing that sucked a bit, there is no Free Software applications for public transport connections like "Fahrplan" for the N900 or the non-free Oeffi. Until we either convince Oeffi's author Andreas Schildbach to make Oeffi Free Software, or someone else writes a program, I added a shortcut to the mobile version of Deutsche Bahn website.

Another thing which was quite nice: If you want to have custom ringtones, but you do not want to have many folder in your SD-card's root directory, you can add the directory "media" and have "alarms", "notifications", and "ringtones" as subdirs which the according applications find automatically. (Torsten added that to the CyanogenMod wiki.)

That is it for the moment. As it says on the Free Your Android campaign page there is still a lotto be done. In the upcoming weeks I will test more programs on the phone, so I can help more people to liberate their own phones. Beside that I already enjoy having a liberated phone, which beside giving me more freedom also works technically better than before.