Memories about some old Free Software floppies and CDs

During the holiday season I visited my parents and wanted to get rid of some old boxes with my stuff there. One of them contained old Free Software distributions, and I remembered how I got involved in Free Software. In 1999, after a Thomsen and an Amiga 500, we had two computers at home: an Intel Pentium II MMX and an Intel 486. For the Pentium we had a modem, and there was an ethernet connection to the 486. One day I wanted to sent e-mails from the Pentium to the 486. It did not make a lot of sense, as both computers were in the same room, but I wanted to achieve that. Well, first I did not succeed, because although both computers had "email programs" installed, I could not directly send mails from one computer to the other. 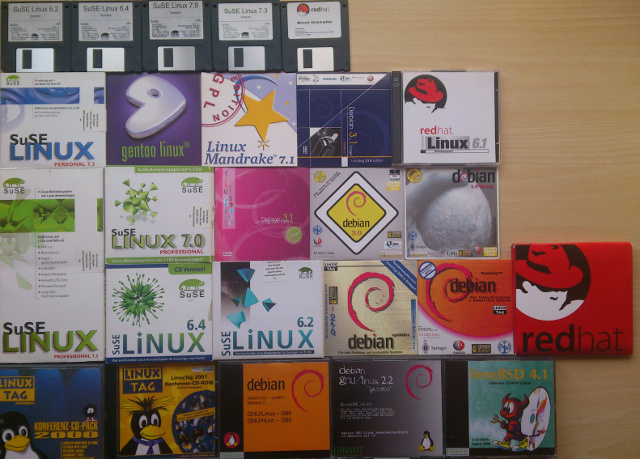 When I complained about this in school, a friend told me that there is a solution and the next day he brought me some SuSE 6.0 floppies, CDs, and books. That was when it all started. Several hours later I had a GNU/Linux installation. Not like today after less than 30 minutes, with a running X server, audio, printer, and everything. There was just the command line. It still took me a long time reading and asking my friend for help to set up X. Being an optimist, this time I decided I like command line more than all those graphical programs. So when I finally had a running X window system, I mainly used it to run more terminal emulators. I think my problems setting up X at that time is still the reason why I like command line tools.

What happened next? I installed every GNU/Linux distribution I could get my hands on. I did not have dual boot on these computers, but quintuple or sextuple boot. I loved playing around with new distributions. With some friends we visited the Linuxtag in Stuttgart and afterwards founded a local Free Software user group. We helped each other to install GNU/Linux on our computers, configuring them to be routers, mail-, print- and file servers. It was so much fun learning how this technology works. Looking at the floppies and CDs from the box, each one of them made me remember some story: visiting a conference, trying to get audio output, compiling software for hours on an old laptop, finding out there are other kernels beside Linux, or how we negotiated who has to pay how much for a new box of CDs and who can keep them for how long.

Then I read the GNU GPL the first time, and afterwards a lot of texts from the GNU philosophy pages. This made me realise: Free Software is a political issue much more than it is a technical issue. The more I thought about it, the more I realised that I in order to help the Free Software movement I needed to learn more about politics. Later I studied politics and management. At university I got in contact with Debian developers, who pointed me to FSFE when I was looking for an internship. I became FSFE's first intern and found out that this is exactly the kind of work I had always dreamed about. That is why I love it here.