I love Free Software - Thanks to all the GnuPG contributors

Today is “I love Free Software”-Day. A day to thank all the hard working people behind Free Software. Beside initiating #ilovefs I also try to write a short thank you note to one project every year. After I thanked Coreboot in 2013, and mpd, ncmpcpp, and MPDroid in 2014 this year I want to thank all the people involved in GnuPG coding and promoting.

Unfortunately I do not remember when exactly I started using the GNU Privacy Guard (GnuPG). I just know that I started using a PGP implementation in 2001 on my GNU/Linux machine. First with some friends from our local Free Software group to encrypt and sign our data and communication, which was a very cool feeling. Later I tried to convince close friends and family with whom I had private conversations to set it up so “we can communicate like we do with letters instead of postcards”. 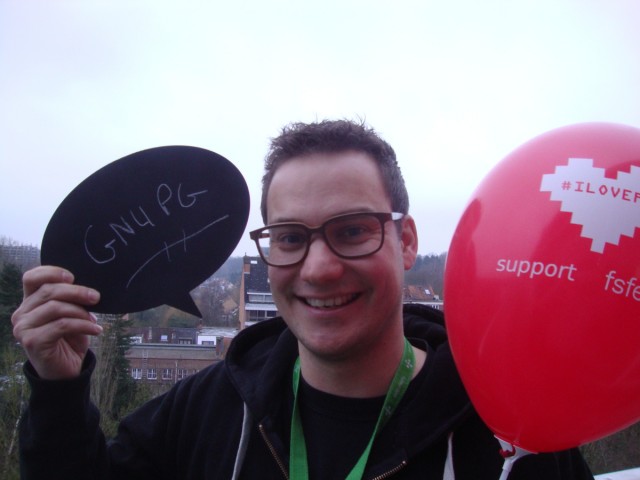 (Just for clarifications: no it is not me on the picture, it is Maurice from our team in the Netherlands.)

In 2002 -- at that time I was definitely using GnuPG -- I had the pleasure to meet friendly Debian guys at the University of Konstanz, who were also quite active in keysigning. So from that time on, whenever I met someone using GnuPG we signed our keys to establish new trust paths.

When I joined FSFE in 2004 it gave me the chance to work with the main GnuPG author Werner Koch. As we decided in 2004 to use GnuPG smartcards as sustaining membership cards for FSFE, I also helped Rebecca + Thorsten Ehlers and Werner with some contributions to the GnuPG smartcard Howto.

This was also the time when I got my first business cards for FSFE, and they included my GnuPG fingerprint! At that time lots of people, especially outside the Free Software community, raised their eyebrows after I answered their question what those numbers are.

In the following years I had the pleasure to meet more and more GnuPG developers: NIIBE Yutaka, from the Free Software Initiative Japan, who thankfully explained me new cool stuff every time we met, and Marcus Brinkmann who was employed to work for GnuPG in the past.

For a long time I had the impression that GnuPG usage was decreasing, and it was not considered that cool anymore. But recently that changed after the Snowden leaks. Many new people wanted to learn how to secure their communications. Fortunately many people, including a lot of our FSFE's volunteers, organised and helped at Cryptoparties, teaching e-mail encryption.

Recently I was very happy to see FSF's Email Self-Defence Guide, which explains how and why you should use GnuPG for your electronic communication. Afterwards Erik Albers worked together with our volunteer Franz Gratzer to to create FSFE's “E-Mail self-defence” leaflets. Thanks to our translators they are now layouted in simplified Chinese, German, English, Spanish, French, Italian, Dutch, and Albanian. The translations for Greek, Latvian, Serbian, and Turkish are in the proofreading process, and the Catalan as well as the Polish translations are almost ready for proofreading. So whenever you want to promote encryption, those leaflets can help you with that.

Many people contribute to GnuPG. I have more space than Laura Poitras in the credits of her film Citizenfour which mentions GnuPG as well, so I will thank some people directly. Beside them there are others who also did important work to enable me to have private communication and to keep my computer more secure. So to all of you whom I do not know (yet) or whom I forgot: Thank you! I love what you are doing!

Special thanks to the GnuPG hackers David Shaw, Marcus Brinkmann, NIIBE Yutaka, Jussi Kivilinna. Thanks to the people documenting GnuPG, e.g. Thorsten and Rebecca Ehlers. Thanks to Martin Gollowitzer for supporting FSFE's sustaining members when they have questions about our smartcards. Thanks to Nicolai Josuttis (Enigmail), the kmail developers, the developers and maintainers of the signing-party tools. Thanks to Zak Rogoff and FSF's campaign team for the E-Mail-Self-Defence guide and to Ana Isabel Carvalho and Ricardo Lafuente who designed those awesome infographic. Thanks to Erik Albers who convinced me that we need the GnuPG leaflets and who created them. Thanks to Franz Gratzer who did the layout for those leaflets. Thanks to FSFE's volunteers for translating them in so many languages! Thanks to all the people around the globe who organise cryptoparties and help others to secure their communication, especially Hauke Laging, Felix Stegerman, and Guido Arnold.

But my biggest thank you of course go to Werner: thank you, Werner, for keeping up your good work during all those years!