Yesterday I had another experience with a naked scanner, although this time a way more pleasant one than at Berlin airport. Hopefully this encourages you more to reject naked scanners yourself in future. 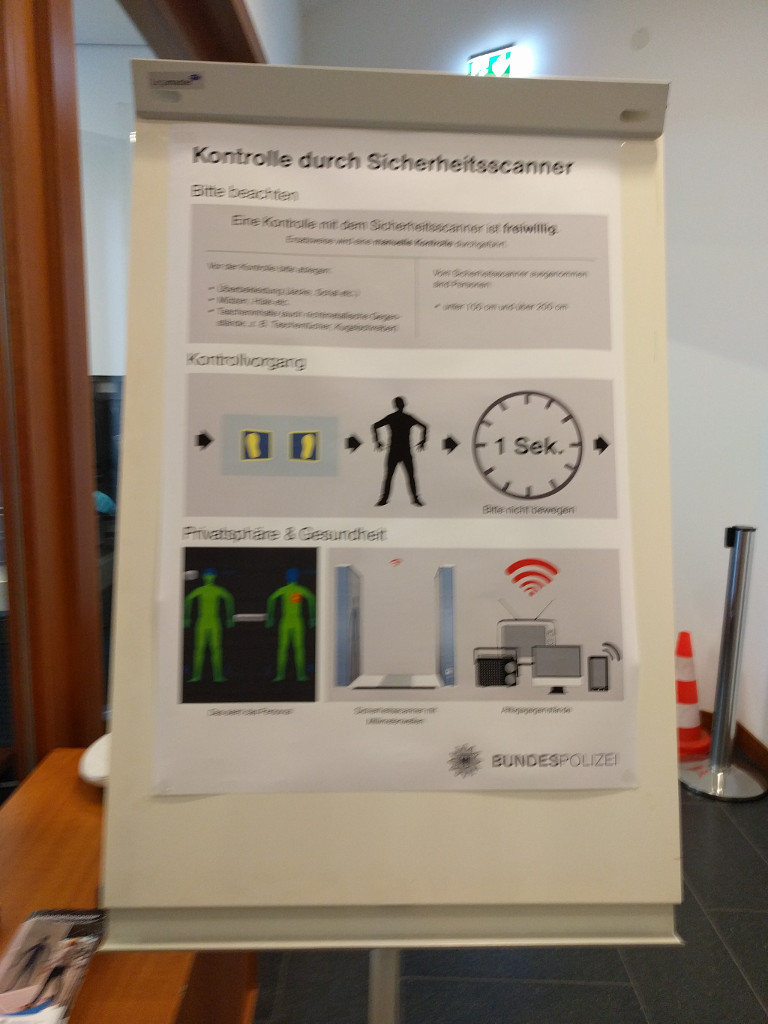 (Sorry for the bad quality of the picture.)

I was invited by the German Ministry of the Interior for a workshop about Germany's involvement in the Open Government Partnership (OGP), which was a good opportunity to meet many interesting people again; and I hope that during the process more people will understand what Free Software can offer them. But back to the naked scanner; at least a little bit more into the direction.

The old offices of the Ministry of the Interior were in a rented building shared with some companies. I lived close to that building. When I was walking at the waterside of the Spree I sometimes saw the minister or a undersecretary of state entering the building, a few meters away from with just one police officer standing between us.

Then they moved into a new building close the Chancellery building and Berlin main station. Although many people apparently do not like the new building I somehow do. Having seen the offices in the old building, and especially the many meeting rooms there which did not have any natural light, I have the feeling that the new building is also an improvement for the staff there.

Beside that the news building has a massive fence around it, and a lot of space between the fence and the building. Furthermore there are lots of cameras, and before I could see the naked scanner itself I already saw the sign above. It again says that the scan is voluntary, and you can choose to be searched manually.

So that is what I did again. The security there is handled by the German Federal Police. I told the officer that I would not like to use the naked scanner. He explained me that they are not dangerous, but I replied that I still do not want to use it. I first expected that I might be asked further questions, like the private airport security did.

This time – after I read several articles on the subject people sent me since my last article – I would have explained that I think most of those machines are a scam. The reason they are bought is good lobby work by those companies. Beside the companies producing them, nobody benefits from them and they are less secure than other measures. I would rather like to see this money being invested into more police officers, who can follow-up on crimes.

But there were no further discussions. They disabled the machine, and another officer was patting me down. No further questions, and everything absolutely friendly. Just my mobile phone was checked for signs of explosives again.

I wish the security at the airport would handle a voluntary naked scan in the same professional manner as the officers from the German federal police did at the ministry.