GNUstav, Fellows and myself at GLT 2009

After FSFE's General Assembly in Spain I attended the Linuxtag in Berlin. Together with Lena, and a lot of other outstanding volunteers we set up our booth and informed visitors about FSFE's work.

What was new this year? Well first, thanks to Henner's and Stian's work we had pdfreaders.org leaflets. Thanks to Pablo we had a nice comic strip, explaining why you should join the Fellowship.

And finally we tested the 0.0.1 version of our booth game "GNUstav the GNU". Markus Meier, who already made the Fellowship posters for the booth, and also does a lot of artwork for Linuxhotel Villa Vogelsang penciled our new Fellow GNUstav. "Gnustav the GNU" is a fairytale about the small GNU Gnustav, who is breaking out from the zoo and exploring the world. On his way there are several occasions where the reader has to interact with booth volunteers from several booths to learn more about Free Software. The game is still in the early development phase and we will continue to develop it. Thanks to all who wrote bug fixes and feature requests and to the booth teams from KDE, the BSD, and Fedora who were involved in the game.

In the end of the day we had a raffle amoung the participants. Here you see the winner from Friday, like all the others she had to build a sword to protect her freedom (Gnustav has seen this cartoon", too). 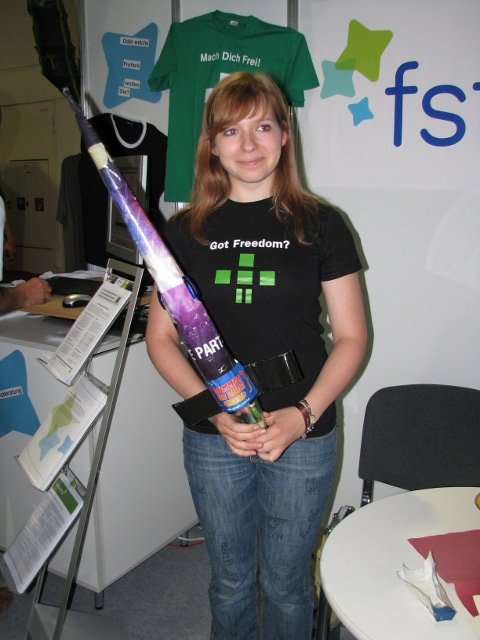 For me personally there was also a change, as this year I was no longer a booth volunteer, but now a paid FSFE employee. In that capacity I gave an interview for a Linuxtag press release (together with Karsten), talked with a lof of interesting Free Software initiatives, had several meetings including the German Free Software buisiness association LIVE, gave a video interview for Linuxmagazin (working with gnash in iceweasel and epiphany gecko, unfortunately not yet with konqueror, epiphany webkit or arora), and of course had a lot of fun talking with a lot of Fellows.

Some more pictures are on Edgar's blog, who like all the other booth volunteers did an amazing job! I am looking forward to Torsten's blog entry, who will show you what the Berlin Fellows did with our booth equipment afterwards. Thanks to all volunteers!!